To share your memory on the wall of Judith Davis, sign in using one of the following options:

Mom is survived by her four children, Jeﬀrey Davis (Republic, Michigan), Wendy (Davis)
Kennedy ( Maybee, Michigan), Gregory Davis (Wilton, Maine) and Matthew Davis, who lived
with her in Cedar Michigan, She has 17 grandchildren and 12 great grandchildren too.

Judith graduated from Michigan State University and was a proud Spartan. She was a teacher in the
early years until the birth of her first son when she stayed home and became the best mother a
family could want. Judith played the violin and lived an interesting life as the family traveled
and lived all over the world from Biloxi, Mississippi, to Paris, France, Waco, Texas to Stuttgart,
Germany, Bangor, Maine to Fusa, Japan with postings to many other U.S. locations in between.

Mom was a long time community theater fan and member of the Shoreline Players in Oscoda, Michigan
where she acted, sometimes in the leading roles in productions like “Ten Little
Indians”, Damn Yankees” and “A Funny Thing Happened On The Way To The Forum” she also directed and
made the best costumes. She loved to write poetry and write long letters. She loved to sew and
made many lovely things for her kids and grandkids and great grandkids. Her real
avocation was making wonderful hand sewn dolls - and stuﬀed animals - many of her own design — the
most recent finished just a few weeks ago - a lovely pair of dolls that look just like her son Jeﬀ
and his wife Jackie (Miron) Davis.

Judith’s greatest love was her children in whom she instilled the same independence
and curiosity and passion for knowledge that she herself possessed. She encouraged
each of them to pursue their dreams and to be the best they could be. She put up with three boys
and a girl who had as pets snakes and turtles and alligators, and even a monkey and a horse. Her
greatest wish to see them grown and happy was fulfilled.

In later years, Judith lived with her son Matt in Cedar, Michigan and has been a proud Leelanau
resident for nearly 22 years where she loved the rolling hills, the National Park, the beautiful
beaches and the wonderful people. She loved to feed the wild birds and sometimes they would sit on
her hand to eat, she also chased away and battled the squirrels with vigor. In the
hardware store in Cedar they called her “Squirrel Lady” … a title she adored.

The Family and Judith wanted to say a special “thank you” to Dr. Thomas Lammy, Dr. Mistry and staﬀ
of Suttons Bay, to Share Care of Leelanau, To Jolynn Davis of Empire who helped her in her home and
did her hair, and all the Nurses, Doctors and staﬀ of Munson Hospital for their excellent care and
support. The family will gather this summer for a service and internment of her ashes in the
Cleveland Township Cemetery. To visit her memorial page or post and view pictures visit
www.oakgrovefh.com
Read Less

There are no events scheduled. You can still show your support by sending flowers directly to the family, or planting a memorial tree in memory of Judith M. Davis (Less).
Plant a Tree

We encourage you to share your most beloved memories of Judith here, so that the family and other loved ones can always see it. You can upload cherished photographs, or share your favorite stories, and can even comment on those shared by others.

Posted Mar 17, 2021 at 11:53am
Grandma has always been a kindred spirit. I have fond memories of feeding ducks, talking about fairies and other magical creatures, and long conversations about the people she loved the most. I will miss hearing her voice, her creativity (her packages and letters were always the best, little dolls and creations, poetry books), her openness to the world, and her knack for storytelling. As her granddaughter, I will carry on our weirdness with my daughters. She is very loved.
Comment Share
Share via:
WK

Erin, you had a very special place in her heart. She always talked about you & showed me the dolls sje was making for your kids. I'm glad she had you in her life!
GL

Posted Mar 15, 2021 at 02:43pm
Mom was simply the best Mom a boy could have! She was loved by those who knew her! Mom simply adored the rolling hills and beautiful beaches of Leelanau County. She was more than a mom - but my best friend throughout my life. She loved her children more than anything else and was still sewing gifts until the last weeks of her life. Our home together was a place of peace and love and she will live on in every chickadee that visits her bird feeder and every blossom that springs from her garden. She loved to talk, and passed that trait too to her kids... who will talk your ears off if you let them. I will miss more than anything being able to talk about anything with her, her interest in what I was doing, her encouragement in my endeavors and her acceptance and encouragement to be me! She fought til the very end wanting to live and return to her home ! She will be missed more than words can express. A wonderful line from an unknown poems says it well " She was but a chickadee small but mighty with a soaring heart". Peace Mom and to all that loved you!
Comment Share
Share via: 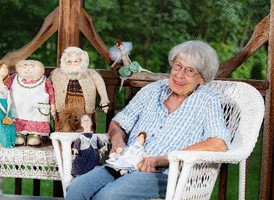 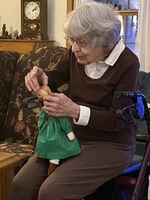 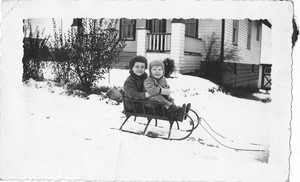