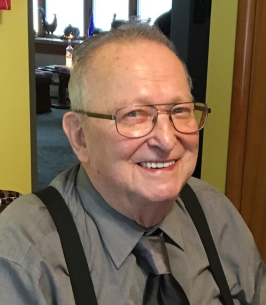 He was born in 1933 in Fennville Michigan the son of Paul and Dorothy (Small) Hunt.

George was a veteran of the US Army PFC and served from 1953 to 1955. In 1955 he married the love of his life Nora Swanson in Angola, Indiana, and they celebrated 67 years together. George worked for Packaging Corporation of America in Manistee until he retired after 43 years in 1995 and also was a member of the VFW Walsh Post 4499 in Manistee. George enjoyed all the years of RV travel with Nora visiting many states, gatherings with family and friends and most recently the Monday night men’s bible study group of the United Methodist Church of Manistee. George stated that he would mostly like to be remembered for having loved his family deeply.

Funeral Services and Military Honors will be held Wednesday, August 31, 2022, at 11:00 am at the Oak Grove Funeral Home 309 W Parkdale Avenue, Manistee, MI with Rev. Dan Barkholz officiating. Visitation will be held one hour prior to the service.

The family is very grateful for the staff of Hospice of Michigan for providing support and care in George’s final days.

Please share a memory with the family at www.oakgrovefh.com. Arrangements by Oak Grove Funeral Home & Cremation Center in Manistee.