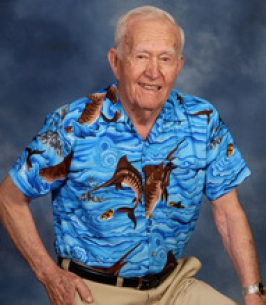 He was born on March 27, 1927, in Arcadia, Michigan the son of the late Charles Clifford & Clara Josephine (Letteau) Iverson. He was a graduate of Arcadia High School Class of 1945. He was a veteran of World War II serving in the United States Army Air Force with the 1st Artic Search & Rescue in Greenland. He married June Alice Carlson on April 23, 1949, in Scottville. They resided in Bear Lake and spent numerous winters in Gulf Shores, Alabama. June preceded him death on August 17, 2018.

Robert was a lifetime builder in northern Manistee County. He was a member of Trinity Lutheran Church in Arcadia where he also had served as an elder. He also was a member of the Bear Lake Lions Club, the Bear Creek Rod & Gun Club, and the Country Highlands Golf Course. A local historian, he was a valued resource for the Arcadia & Bear Lake Historical Museums. He was an avid reader and also enjoyed gardening, hunting, fishing, and spending time with family and friends.

Memorial Services for Robert C. Iverson will be held Thursday, September 1, 2022, at 7:00 PM at Trinity Lutheran Church in Arcadia with Pastor Ryan Tinetti officiating. Interment with Military Honors will be in the Pleasanton Township Cemetery. The family will receive friends at the Oak Grove Funeral & Cremation Center in Manistee on Wednesday evening August 31st from 6-8 PM and at the church on Thursday from 6:00 PM until time of service.

Memorials in Robert’s name may be directed to Trinity Lutheran Church in Arcadia, the Arcadia or Bear Lake Historical Museums, or the American Cancer Society.

Please share a memory with the family at www.oakgrovefh.com. Arrangements by Oak Grove Funeral Home & Cremation Center in Manistee.