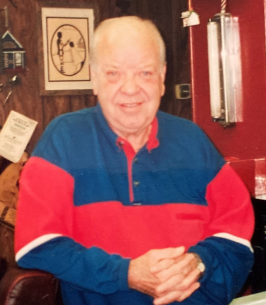 He was born in Scottville, MI on November 18, 1933, the son of the late Alvin J. & Gertrude M. (Masten) Howe. Len attended and graduated from Scottville High School in 1951 where he was very active in the sports programs. He began his barbering career at Greens Barber College in Detroit, MI on October 18, 1951. From June of 1953 to April of 1955, he served in the US Army, attached to the Adjacent General Corps stationed in Stuttgard Germany.

Len moved to Manistee in April of 1955 and went into business with the late Mike Shimnoski in the City Drug Store Barber Shop. Shortly after, he purchased the Old Sugar Bowl Building at 417 River Street, the site of Len’s Barber Shoppe until his retirement on August 1, 2003. During his time on River Street, he was an advocate of the historic preservation of the downtown business district and was active in Project Facelift.
Over the years Len held many memberships including St Peter's Church Board, MRA Board, Chamber of Commerce, IDC, Manistee Golf & Country Club, Manistee Jaycees, American Legion, Elks, BPO Lodge #250, & Trinity Lutheran Church. He was also active as a Boy Scout Leader and with The United Fund. He enjoyed fishing and camping.

In addition to his parents Len was preceded in death by his daughter; Kerry Lynn Howe, the mother of his children; Lorna Jean Dumas, and his siblings; Geraldine, Byron, Burton and Ronald.

Memorials in Len’s name may be directed to the Scottville Clown Band Scholarship Fund or the Manistee Veterans Van Transportation Program.

Please share a memory or photo with the family at www.oakgrovefh.com. Arrangements by Oak Grove Funeral Home & Cremation Center in Manistee.