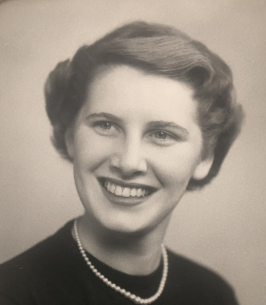 Mary M. Grenell, age 88, passed away on April 7, 2022, at the home of her eldest daughter, in Sparks, NV, from complications of COPD. She left this Earth surrounded by her loving children and their spouses.

Mary was born to Milton and Alice Wilson in November 1933, in Ludington MI, during her father’s career in the U.S. Coast Guard. Her family moved to Manistee, MI where she graduated from Manistee High School in 1952. In June 1954, she married Connie Grenell, in Onekama, MI and enjoyed 64 years together before his death in 2018.

She was a devoted wife and accompanied Connie wherever his orders took him during his
20-year career in the USAF. She lived in Scotland; New Mexico and Mississippi; and various bases throughout MI (New Haven, Port Austin and Kinde). She chose to be a stay-at-home mom to provide a stable, nurturing environment to her children.

Mary was always generous with her time volunteering for various community organizations. As a military wife, she was actively involved in the NCO Wives Clubs. The family moved to Manistee in 1972, when Connie retired from the service.

Mary was actively involved in the Order of Eastern Stars and served as Worthy Matron a couple of times. She traveled all around Michigan teaching Schools of Instruction. For many years, she sold desserts from the Eastern Star booth at Red Szymarek Park during the Arts/Craft Fair.

Mary LOVED to read! Some of her favorite authors were Danielle Steel, John Grisham and David Balducci. She was a loyal Jeopardy and Wheel of Fortune viewer. She also enjoyed baking/decorating beautiful cakes for family and friends' graduations, birthdays, weddings, and anniversaries. Her grand/great grandchildren delighted in punching down & rolling out the dough for her yummy raisin bread. She was an excellent cribbage player and enjoyed playing other games when the families got together for the holidays.

A Celebration of Life is being planned for September 10, 2022, at Oak Grove Funeral Home, Manistee, MI, at 1 pm, with visitation from 12 – 1 pm, followed by a light lunch at the American Legion, Manistee, MI.

In lieu of flowers, contributions in Mary’s name may be directed to the American Legion, Post 10, Disabled American Veterans, Unit Salt City 43, or Homeward Bound Animal Shelter, in Manistee. MI. Written condolences may be sent to 5412 Energystone Dr., Sparks, NV 89436.

Please feel free to share a memory or photo with Mary’s family at www.oakgrovefh.com. The family has entrusted funeral arrangements with Oak Grove Funeral Home & Cremation Center of Manistee.