To share your memory on the wall of Bernadine Gehopolos, sign in using one of the following options:

Print
Bernadine Anderson Gehopolos,100, passed away peacefully in the presence of her loving family on June 26, 2021, in Zeeland, Michigan.

Bernadine was born in Manistee, Michigan, on July 2, 1920, to John and Monica (Yuhse) Anderson. She gra... Read More
Bernadine Anderson Gehopolos,100, passed away peacefully in the presence of her loving family on June 26, 2021, in Zeeland, Michigan.

Bernadine was born in Manistee, Michigan, on July 2, 1920, to John and Monica (Yuhse) Anderson. She graduated from Manistee High School and Augustana Nursing School in Chicago as a registered nurse. She began working as an RN at Augustana Hospital after graduation as well as served as a private duty nurse. Later in her career, she worked in Manistee at Mercy Hospital and for 18 years at Manistee County Medical Care Facility. Over the years, she used her education and skills as a nurse to help many people. She was often called on to help family, friends and neighbors with care and advice. Her compassionate nature was never more evident as she cared for her father for the last 14 years of his life and helped care for several of her close friends at the end of their lives.

In 1946, Bernadine married the love of her life, Lewis Gehopolos, after he returned from military service in World War II. They spent the next 10 years of their life living in Chicago. In 1955, they returned home to Manistee to raise their family.

In addition to her career, Bernadine devoted her life to her family and raising her three daughters. She was very active in the Manistee community serving as President of Washington school PTA, a member of the Northside Improvement Association, a member of Lakeside Club, and along with her husband, the Elks, Manistee Lodge #250. She was a long-time member of Good Shepherd Lutheran Church.

Growing up on the northside of Manistee, Bernadine spent much of her youth on Fifth Avenue Beach and at Orchard Beach State Park. She was a lifelong activist for the environment, believing in our responsibility to protect our natural resources, especially the Great Lakes.

Throughout the years, the Gehopolos home was the center of many activities for family, friends and neighbors. Bernadine’s (and Lewie’s) love of cooking and entertaining was evident in the many gatherings they hosted over the years. For many years, they hosted the annual north side neighborhood Halloween party.

Bernadine was a lover of the arts, especially music. There was always a piano in their home, and she was an accomplished pianist. She especially enjoyed Blues and Jazz. Her time in Chicago allowed her to see many artists in person, and she began an extensive record collection that spanned many decades.

In 1969, she and Lewie moved to Grand Haven because of his job transfer where they continued to raise their youngest daughter. Bernadine pursued her many interests including gardening, travel, music and keeping up with world events, among others. After Lewie passed away, she moved to Zeeland to be closer to her daughter, Bethesda. Eventually, she moved into the home of Bethesda and her husband Richard, where she spent the rest of her life.

The family will receive friends at the Oak Grove Funeral Home & Cremation Center in Manistee on Saturday July 10, 2021 from 1:00 PM until 2:00 PM. Family services will follow.

In lieu of flowers, those wishing to remember Bernadine are asked to consider a contribution to the Manistee North Pierhead Lighthouse c/o, of the Manistee County Historical Museum or Good Shepherd Lutheran Church.

Please share a memory with the family at www.oakgrovefh.com. Arrangements by the Oak Grove Funeral Home & Cremation Center in Manistee.
Read Less

To send flowers to the family or plant a tree in memory of Bernadine Gehopolos (Anderson), please visit our Heartfelt Sympathies Store.

We encourage you to share your most beloved memories of Bernadine here, so that the family and other loved ones can always see it. You can upload cherished photographs, or share your favorite stories, and can even comment on those shared by others. 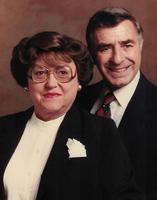