To share your memory on the wall of JoAnn Carlson, sign in using one of the following options:

She was born December 28, 1931 in Chicago, Illinois the daughter of the late Mike and Lela (Burkett) Lambert. She graduated fr... Read More
JoAnn Carlson, age 89 of Onekama died Tuesday, June 15, 2021 at Bronson Methodist Hospital in Kalamazoo.

She was born December 28, 1931 in Chicago, Illinois the daughter of the late Mike and Lela (Burkett) Lambert. She graduated from Austin High School in Chicago, followed by 2 years of college also in Chicago. On July 18, 1953, she married Darwin Eugene Carlson at the Onekama Trinity Lutheran Parsonage. He preceded her in death on February 26, 2014. She was employed as a secretary in the Woodland Department at Packaging Corporation of America from 1951 to 1988. She also briefly was employed by the Onekama School System.

She was a member of the Trinity Lutheran Church of Onekama. She loved painting, reading and computers.

She was also preceded in death by her son, David Carlson in 2005.

Memorial Service will be held at 11:00 AM on Saturday, June 19, 2021 at the Oak Grove Funeral Home &
Cremation Center in Manistee with Pastor Jacob Sherry officiating. Final interment will be in the Onekama Village Cemetery. The family will receive friends at the funeral home from 10:00 AM until time of service.

Memorial contributions in memory of JoAnn Carlson may be directed to Trinity Lutheran Church of Onekama
.
Please visit JoAnn’s personal book of memories page at www.oakgrovefh to share a story or photo.

To send flowers to the family or plant a tree in memory of JoAnn Carlson (Lambert), please visit our Heartfelt Sympathies Store.

We encourage you to share your most beloved memories of JoAnn here, so that the family and other loved ones can always see it. You can upload cherished photographs, or share your favorite stories, and can even comment on those shared by others.

Posted Jun 19, 2021 at 08:55am
Rest In Peace our dear sweet JoAnn. You brought a lot of laughs , love and joy into my heart . You will be missed !
You and Cubby make sure you behave yourselves now ! Tell my folks I love them and miss them .❤️💜
I love you and will miss our conversations and laughs.
Love, Renee

Posted Jun 17, 2021 at 08:33am
Joann was the highlight of our day . We here at Meadow Woods are sharing in your sadness of the lost of a great beautiful women!

Posted Jun 16, 2021 at 12:29pm
I would take Joanne on car rides and always go the back way so that she could look at the trees, flowers and wildlife. I was single at the time and when ever she saw a man walking or riding a bike she would say there’s one for you Marsha….she always made me laugh😂😂. She sure could say the darndest things. I will cherish the memories I’ve had with her. She was a very unique and special person in my life. I always enjoyed the times we spent together. I will miss her dearly. RIP my friend. 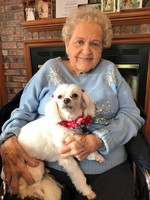 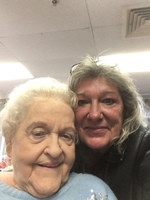 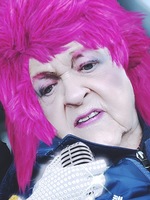 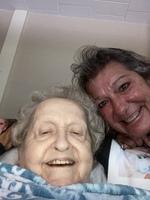