To share your memory on the wall of Richard Herrick, sign in using one of the following options:

Print
It is with great sadness that we announce the passing of Richard Charles Herrick, 86, of Manistee on February 5th, 2021.

Known as Dick, Dad, Grandpa, Papa Richard and Great Grandpa to most people who loved him, Richard was kind, funny an... Read More
It is with great sadness that we announce the passing of Richard Charles Herrick, 86, of Manistee on February 5th, 2021.

Known as Dick, Dad, Grandpa, Papa Richard and Great Grandpa to most people who loved him, Richard was kind, funny and always there for his family. He had a fun, eventful life and everyone who met him was blessed to have known him.

Richard was born on May 27, 1934 in Hillman, Michigan to Stanley and Johanna (Brandt) Herrick. Growing up in Hillman he worked on the family farm and graduated from Hillman High School, Class of 1952. He served in the United States Army during the Korean War. In 1956 he married Ruth Baugher. During this time he continued farming and worked on the Grand Trunk Railroad. After a lot of hard work and dedication, Richard worked his way up to Railroad Engineer! Richard and Ruth were blessed with six children and later, ten grandchildren. Richard loved being a grandpa!

After retiring from the railroad, Richard married Cathie Cole in 1995 and gained two more children and three more grandchildren. Him and Cathie drove all over the country in the coolest campervans, visiting places such as Arizona and New York City. He never stopped talking about going out west and especially loved New Mexico. In addition to traveling and spending time with his family, Richard enjoyed playing games at the casino and eating sweets. He always had a bag of jellybeans or butterscotch candies in his van and never turned down desserts!

Memorial Services will take place Saturday, June 12, 2021 at 11:00 AM at Saint John Lutheran Church in Hillman with Pastor Jason Mandley officiating. Military Honors will follow. The family will receive friends at the church from 10:00 AM until time of service.

To send flowers to the family or plant a tree in memory of Richard Charles Herrick, please visit our Heartfelt Sympathies Store.

Print
Funeral Services and Military Honors will follow the visitation at 11:00 AM.

Posted Feb 12, 2021 at 08:37pm
Our hearts go out to you at the passing of your father. We are sorry for your loss and remember your dad with fondness. God's peace be with all the family. Yours, Janice and John
Comment Share
Share via: 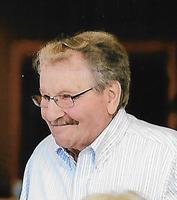