To share your memory on the wall of Robert Johnson, sign in using one of the following options:

Steve worked for Asgrow Seed in sales for many years. Later he and his son Ron owned and operated a gas station and landscaping business for many years in Climax, MI. He also worked as a volunteer firefighter/first responder with the Climax Township Fire Department for 30 years and worked his way up to Fire Chief before he retired. Steve also worked on the snow removal crew for Larsen’s Landscaping and was one of the workers that help keep Little River Casino and Resort clean from all the snow.

He was a member of the Manistee Elks Lodge #250, where he served as a trustee for 7 years, who was always willing to offer wise advice, give opinions from a unique perspective and was an incredible member. He was also a member of the American Legion Post #465 in Climax, MI.

Steve loved anything to do with the outdoors. Whether it was snowmobile trail maintenance for the snowbirds, camping, cutting wood, hunting deer, riding his quad, he just loved being outside. He and Ann also enjoyed wonderful vacations in Alaska, Hawaii and all over the United States. Steve also enjoyed going to watch his grandchildren, nieces and nephews sporting events whenever he could.
Steve is survived by his wife, C. Ann Johnson of Manistee; children, Ron (Amy) Johnson of Bear Lake, Scott (Mary) Amsbury of Richland, Steve (Lora) Amsbury of Mattawan, Terry (Carol) Amsbury of Richland, Bill (Kim) Amsbury of Grand Rapids, Paul (Stacey) Amsbury of Tawas and Mike (Chris) Amsbury of Henderson, NV; brothers, Howard (Kathleen) Johnson of Battle Creek and Clif (Julie) Johnson of Ann Arbor; sister, Julie Cain of Battle Creek; and numerous grandchildren, great-grandchildren, nieces, nephews and cousins.

He is preceded in death by his parents; his first wife, Bonnie Johnson; daughter, Cynthia Johnson; and grandson, Sean Amsbury.

Cremation has taken place and a graveside service will be held at 2:00PM on Saturday April 17, 2021 at Prairie Home Cemetery in Climax, MI.

Memorial contributions in memory of Steve may be directed to either the Manistee Elks Lodge #250, 432 River St. Manistee, MI 49660 or the Climax Township Fire Department 119 W. Maple St. Climax, MI 49034.

Please feel free to share a memory or photo with the family at www.oakgrovefh.com. The family has entrusted funeral arrangements with Oak Grove Funeral Home & Cremation Center of Manistee.
Read Less

To send flowers to the family or plant a tree in memory of Robert Steve "Steve" Johnson, please visit our Heartfelt Sympathies Store.

3 trees were planted in the memory of Robert Johnson 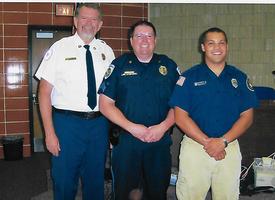