To share your memory on the wall of Donald Longfield, sign in using one of the following options:

Don worked as a Tool & Die Supervisor for Fisher Body Div of G.M.C 1945 and 1948-1964, Bendix Aero-Space Program from 1965-1968, and in General Practice of Dentistry in Kalkaska from 1968 until retirement in 1994. He has also served Ferris State University as a clinical dentist & consultant for the School of Dental Hygiene. Don was a member of both the American and Michigan Dental Associations and was honored as the Michigan Dental Association’s “Dentist of the Year 1987”. He was the President of the Nation Flying Dentist Association and serviced on the Board of Governors for the University of Michigan School of Dentistry Alumni Association.

During the year 1986-1993 Donald & Sylvia established, set up and operated a fee two chair clinic for Blossoming Rose in Jerusalem, Israel and from 1976-1994, they worked in remote field dentistry in Mexico, Guatemala and Honduras. Don Incorporated Friends Across Borders (FAB Inc.) to assist people in Central America. Dr. Longfield was President of Kalkaska Rotary Club, Kalkaska Sno Pakers, served on the Kalkaska Trout Festival, the Kalkaska Community Chorus and as a board member of The Kalkaska County Centennial Committee. Don was an advisor to Grand Traverse Area United Way, Chair of Kalkaska Airport Committee, Director of Cadillac State Bank-Kalkaska Branch, Board Advisor for National Bank of Detroit-Northwest and a Board Chairman of K.A.I.R. In addition, he enjoyed singing Barbershop with the Cherry Capital Chorus, as well as hunting, shooting, repairing items around the farm and was a gunsmith, even building an addition onto his home. He shared the honor of being Kalkaska Citizen of the Year 1977 with his wife, Sylvia, and he was 2018 Trout King!

Memorial services for Donald A. Longfield will be at a later date to be announced. Cremation has taken place at Oak Grove Cemetery in Manistee with final interment in Orange Twp
Cemetery, Kalkaska. Those wishing to remember Dr. Longfield may make a donation to the Cornerstone Community Bible Church.
Read Less

There are no events scheduled. You can still show your support by sending flowers directly to the family, or planting a memorial tree in memory of Donald Arthur Longfield.
Plant a Tree

We encourage you to share your most beloved memories of Donald here, so that the family and other loved ones can always see it. You can upload cherished photographs, or share your favorite stories, and can even comment on those shared by others.

Plant a Tree in Memory of Donald
Plant a tree 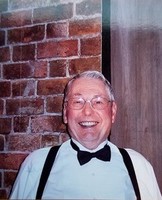