To share your memory on the wall of Merle Brown, sign in using one of the following options:

He was born on July 26, 1935 in Frederic, WI the son of the late Robert Merle and Dorothy Agnes... Read More
Merle Wayne Brown, Age 85 of Bear Lake died Sunday evening November 29, 2020 at The Maples-Benzie County Medical Care Facility in Frankfort.

He was born on July 26, 1935 in Frederic, WI the son of the late Robert Merle and Dorothy Agnes (Daniels) Brown. He was a graduate of Siren High School Class of 1953. Despite his hearing disability Merle was the quarterback for Siren High School and his senior year took the team to State. He also was homecoming king and student council president. He received many band awards and played taps for the local Military Funerals. He married Bette Lou Kern, his high school sweetheart on December 3, 1955 in Pine City, MN. He continued on to the University of Wisconsin in Superior and earned a Bachelor’s degree in chemistry.

Merle started his career working for Jeno's Pizza and Pie Filling in Duluth, MN as a food technician where he developed the cherry pie filling recipe that is now owned by Wilderness and can be found on the store shelves still today. The family moved to Bear Lake, MI in 1968 where Merle worked for Sawyer Fruit and Vegetable Co supervising the start-up of the instant quick freeze operation. After purchasing a small fruit farm, he made the decision to become a full-time fruit farmer and bought the Briske Farm in 1972 and continued farming until he passed.

He was ahead of his time in fruit farming with all his young fruit tree plantings being spaced closer together than what was planted at the time in the middle 70s. He also was one of the first in turning to organic production, having 130 acres of apples and fifty acres of tart cherries in the mid 1990’s

Memorial Services for Merle Wayne Brown will be held Saturday, December 5, 2020 at 1:00 PM at the Tabernacle Church 77 Hancock Street in Manistee with Pastor Seth Bush officiating.

We are asking that you please wear a mask for the entire service and that you respect social distancing.

To send flowers to the family or plant a tree in memory of Merle Wayne Brown, please visit our Heartfelt Sympathies Store.

We encourage you to share your most beloved memories of Merle here, so that the family and other loved ones can always see it. You can upload cherished photographs, or share your favorite stories, and can even comment on those shared by others.

Rex and Rick Payne sent flowers to the family of Merle Wayne Brown.
Show you care by sending flowers

Posted Dec 05, 2020 at 02:29pm
To all - I have the best memories of both your Dad and Mom, playing cards and eating with friends. Merle always made sure that my plate had all the food to sample and he would swipe what he liked off my plate. Lots of laughter and fun. One favorite memory is the moose hunting trip that Bart went on with Merle and Bob and the scrapbook of pictures and stories that were shared of all the shenanigans, the "big" hunt and camp life. Thinking of all of you and love you all, Helen Mathieu

Posted Dec 03, 2020 at 09:09am
Please accept our most heartfelt sympathies for your loss... Our thoughts are with you and your family during this difficult time.

Rex and Rick Payne purchased the Sweet Tranquility Basket and planted a memorial tree for the family of Merle Brown. Send Flowers

Posted Dec 03, 2020 at 08:13am
Many great lunches/dinners and day trips spent with Merle and Loree. He was always ready to go somewhere, especially if we were having dessert along the way. He and his sense of humor will be greatly missed, but the memories of those good times will be with us forever. Thoughts and prayers to all the family!

Posted Dec 02, 2020 at 10:50pm
Memories of my brother, Merle. Shared by Jerry Brown from Aurora, Colorado.
1) Merle was three years older than me, so we grew up together and played together: basketball out by the garage, ice skating on Doctor's lake, at Bethany Lutheran in Sunday School and worship, in a very active Boy Scout troop where Merle and I achieved
the highest rank of Eagle Scout, and with our Dad on the Board of the troop, and Merle, Bette, and I tapped maple trees by the cabin on Clam Lake, with Dad building a 6 foot tin pan for boiling the sap down to the syrup status, playing football and basketball in high school with Merle as the quarterback of the Siren football team, and having a paper route for the Evening Telegram-Superior, and the Minneapolis Sunday Tribune with 81 customers that Merle drove me around the route.
Years ago, Joan and I were in Branson, Missouri , along with Dan and Elsie, and Merle and Bette. It was a good time.
Over the years, Joan and I spent good times at their home. Yes, good memories.
1) In September, 2016, Joan, my wife and I made a long trip from Colorado to South Dakota, Minnesota, Wisconsin, to Bear Lake, Mi, arriving at apple picking time. Wooden boxes were built to contain over 900 pounds of apples, and Ted, grandson, loaded the boxes on a semi-trailer with a fork-lift. Thirty to thirty five boxes were loaded on the semi-trailer and strapped down. Bette, Merle's wife ordered the truck driver to get going and he called back from West Virginia saying he got the load in the factory.
Quite a memory as Merle told me he sells "about a million and a half pounds of apples every Fall.

2) In September, 2019, Lynn, daughter, came with Merle to visit Joan and me in Aurora, Colorado. I was in a Rehab Hospital,
recovering from a total knee replacement surgery. Fortunately on that Sunday when Merle and Lynn were at our home, the
hospital let me go home on a pass for a few hours. A beautiful memory that I won't forget as Merle talked about his family, Brown's Orchard, and his life-long partner, Bette, of 62 years. Wonderful memories of a special brother that I will truly miss.

Posted Dec 02, 2020 at 08:09pm
Hold onto the memories and they will help carry you through this time. May you find peace.
Comment Share
Share via:
MW

Mark White I purchased Organic Apples from Merle for many years. Merle was a wealth of information about fruit growing, weather, chemistry and whatever might be on his mind at the moment. Bette was always right there with us in the kitchen as Merle's partner in all family and business matters. They both had good a good sense of humor and we all enjoyed the cookies that seemed to be ever present. I also experienced what it takes to work an Organic fruit operation with many visits to the orchards with Merle and Bob. Much love and sympathy to the Brown family. 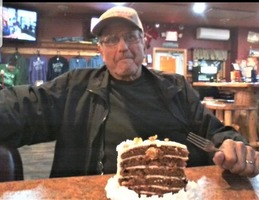 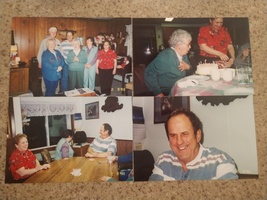