To share your memory on the wall of Hazel Vickers, sign in using one of the following options:

Print
Hazel Vickers, age 82 was called home to Heaven by her precious Lord & Savior on November 8, 2020.

She was preceded in death by her husband Bob, 61 years married.

She is survived by her daughter; Barbara (David) Northuis, gr... Read More
Hazel Vickers, age 82 was called home to Heaven by her precious Lord & Savior on November 8, 2020.

She was preceded in death by her husband Bob, 61 years married.

A Celebration of Life will be held at a time to be announced later.

In lieu of flowers, memorials in her name may be directed to Faith Hospice.

There are no events scheduled. You can still show your support by sending flowers directly to the family, or planting a memorial tree in memory of Hazel G. Vickers (Austin).
Plant a Tree

We encourage you to share your most beloved memories of Hazel here, so that the family and other loved ones can always see it. You can upload cherished photographs, or share your favorite stories, and can even comment on those shared by others.

Plant a Tree in Memory of Hazel
Plant a tree 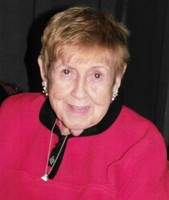